Over the last few decades, scientific assessments of the risk of a pandemic have viewed the threat with increasing seriousness. And it’s now widely recognized that our societies are woefully unprepared.

After avian flu had spread from Asia to Europe in 2005, Mike Leavitt, US secretary of state for the Department of Health and Human Services, observed, “Some will say this discussion of the Avian Flu is an overreaction… The reality is that if the H5N1 pandemic virus does not trigger pandemic flu, there will be another virus that will.”

So the rapid collapse scenario used in The Division, while fictional, is still realistic.

"…I got a chance to try out a Beta version of Ubisoft’s Collapse simulator, and it’s scary. All you have to do is punch in the address of your location—or any location you want to test out—and let the simulation run…"

The simulator treats you as "patient zero," the person carrying the virus, to test how long it would take for a fictional smallpox virus to culminate in global collapse.

"…After punching in my coordinates from North London, I watch in horror as my every minor move within a tiny vicinity leads the virus to rapidly infect hundreds and thousands of people!!!" 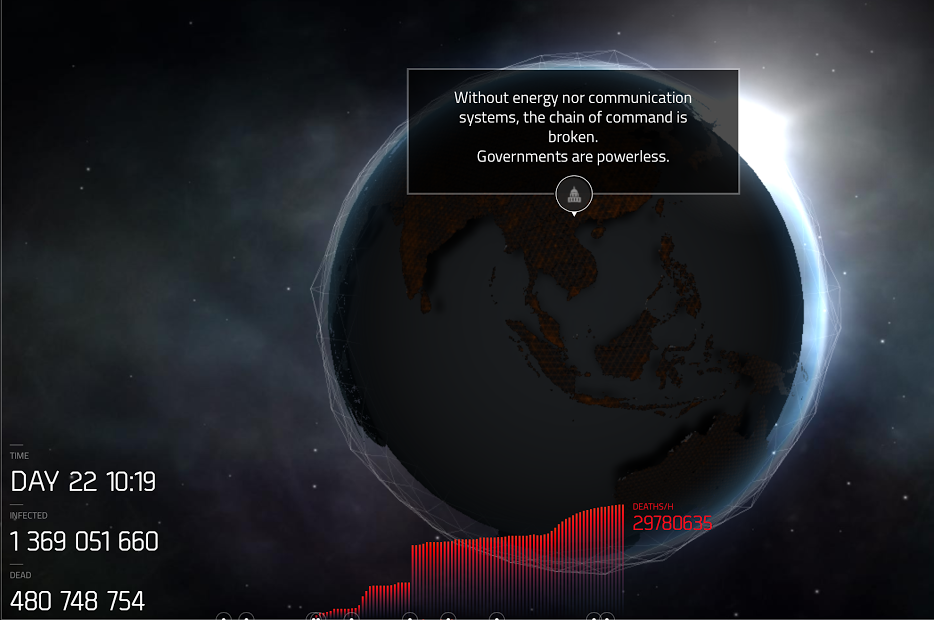 My first step is to visit the hospital when it becomes clear I’m really ill, which does little except infect 400,341 people by Day 4.

I get discharged the next day. The government is delivering emergency vaccines, so I head out to my nearest distribution venue. It’s so crowded, I’m still queuing until Day 6 – when the vaccines run out.

I head to the local supermarket to stock up. The shelves are virtually empty, and fighting’s broken out over what’s left. The government declares a state of emergency.

By Day 9, over 2 million are infected, the death toll is up to 398,411, and the cops can’t contain the chaotic rioting on the streets.

I’d already booked a flight to Geneva days earlier to get away. By the time we land, over 13 million people are infected worldwide, and 773,411 people dead. Martial law is declared in major cities.

By Day 22, half a billion people have died, with 1.4 billion infected. Energy infrastructure, communications systems and supply-chains fail. Military chains of command break down.

By Day 24, the world as we know it has collapsed.

The End of Society Simulator helped create The Division’s scenario for New York City: the contagion rate and death rate of its virus matches the fictional smallpox strain in the game.

This recurring theme in entertainment may well manifest all too human anxieties about death. But it also reflects a growing consciousness, backed by the scientific community, that nature has boundaries—and that when we ignore them, we do so at our own peril.